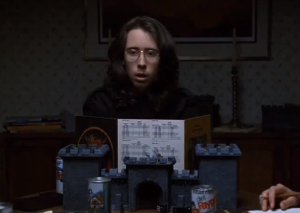 I organized and ran my first game when I was 10 years old. Since then I’m tended to be the person in my group of friends who buys games. I inevitably learn the rules best, and end up shoehorned into being a Gamemaster (GM). The term varies: Dungeonmaster (DM) for Dungeons & Dragons, Storyteller for my own Fickle RPG, etc. But the concept is the same. The GM runs the game. They make the story and campaign, play NPCs, balance encounters, figure out plot twists and guide character development. Depending on the system being a GM can be exhausting. When I ran D&D 4th edition for 6 months I was basically putting in 4-8 hours a week in prep work, between drawing maps to choosing miniatures to calculating encounters. Thankfully with Fickle RPG my prep work is almost nil as I just show up with my binder of rules/dice/sheets/notes and play a story with the group.

(And no, that isn’t me in the picture above, that’s from an enjoyable episode of Freaks and Geeks)

Anyway for all my experience and breadth of games I’ve run, I still have plenty of flaws as GM. I thought I’d list a few here as a bit of an introspective look, and also to help other GMs who might struggle with the same.

I generally like to create a somewhat mysterious and somewhat interesting plot, but then instead of slowly leaking the info out to the players so they can start to see the big picture, I inevitably end up with a scene with a pivotal, know-it-all character, with plenty of time and no pressure, where they unfold the whole thing, and the players have ample opportunity to ask questions or get any clarification. Then after this they sort of know the whole story, so we more or less go through the rest of the story with no more mystery. This is called an Exposition Dump. I’ve done this for an embarrassing number of campaigns.

Literally happened last week with my alien Fickle RPG where the characters got to talk to one of the big cheese know-it-alls to the point of him literally saying “Anymore questions?” I didn’t like the situation as it was happening and I knew I had failed at slowly showing the plot.

The ideal would instead be revealing enough information through dialogue, scenes, atmospheric descriptions, etc. that the players could get the jist without needing an “exposition dump”.
Basically the opposite of William Gibson.

Some interesting articles on the idea:

NOTE: Just an aside on the last link. One of the people involved with Extra Credits is James Portnow. In my honest opinion the guys a bit of a fake who talks a lot, but hasn’t actually designed anything. Trying to find proof of any actual work results in a ghost town. Some funny forum posts on the topic (#1 #2)

Part of this weakness comes from my improvisational style and freeform campaigns where I don’t like to plan too much in advance or railroad the players. So we end up in unexpected situations every single session.

As a result when I make an NPC or character for the players to interact with I generally slap a name on a vaguely defined outline of a person. They’ll likely have a gender. Maybe a binary age of “old” or “normal”. And that’s about it.

I’ve improved a bit by always keeping a list of random names (pulled from census data) so at least I don’t have a legion of “Bob” and “Jill”.

What I need to do is figure out a rough GM system that I run/use behind the scenes to make better characters. Sort of like “choose name/race/gender/age, choose 1 defining physical feature, choose 1 motive/attitude”.

My other problem with characters is I have trouble roleplaying them. Part of this is because the character’s aren’t well defined in my mind or those of my players. So I don’t know what kind of voice they’d use, or speech pattern, or slang. Honestly a lot of the characters end up just talking pretty much like me.

I have a lot of motivation to improve here. Whenever I HAVE made a memorable character (normally by a simple change to my routine like HAVING a specific speech pattern) the players have brought that person up months later.

I think I’m alright at scene descriptions, especially depending on the genre. Depending on the game I might have a map to help me. Or if the scene is based in the real world I can fallback to common tropes or basic descriptors that paint the scene (like saying “a convenience store”).

What I am rather bad at is incorporating weather (lots of unspoken sunny days), time of day (normally I don’t get more granular than day/night), or environmental differences like fog, slick ground, etc.

Some of this flaw stems from improvising. And as with characters I think the solution is similar: a better GM system on my end of the table. Even just another step or reminder to myself when describing a scene. Physical features, time of day, but then remember to say the weather and anything different/unique to the area.

I think this would benefit a lot of encounters because weather can have such a cool impact on an otherwise run-of-the-mill scene. Chasing a thief through the streets is a lot more interesting if there’s a howling snow storm at the time, reducing vision and numbing fingers.